Phu Quoc is a tropical island located to the south of Vietnam and only accessible through plane or boat. it is one of the most popular destinations for sun seeking travelers in the country. The island is mountainous with lots of forests and white sandy beaches, and arguably provides the best sea-food in Vietnam but definitely has the best fish sauce.

When we at Fusion think of “getting away from it all”, Fusion Resort Phu... 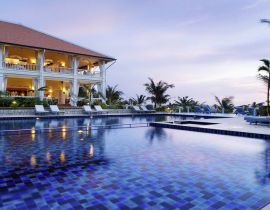 Salinda Resort Phu Quoc Island is a luxury beach resort located on the frontline of the...

1. Slipper lobster (Tôm mũ ni) Slipper lobster is truly amazing beyond your expectation! The most common way is to boil the lobster so that you can enjoy the sweetness and freshness of...
More

Phu Quoc island is a paradise place for your leisure, trekking trip, relaxing on a beautiful beach.