Dien Bien Phu is located in Muong Thanh valley in the northwestern region of Vietnam. The city became best known when on May 7,1954 the first victory in the Indochina war was achieved against the French colonists and left behind historical remnants such as Noong Nhai memorial, Muong Phang forest and Dien Bien Phu city where the battle took place. The province has many forests, high mountains, narrow valleys, plains and springs.

A memorial for all the 444 victims that died during the massacre bombing on April 25th, 1954 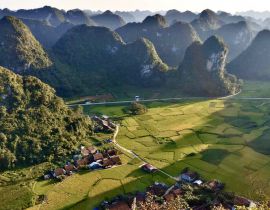 Muong Phang commune covers over 200 square kilometers of forests and has many small islands....

Travel to North west Vietnam you can expect
More